Sunday we celebrated Samuel's 8th birthday with our usual family party. His dessert of choice was cupcakes, and the icing covered faces on some of my younger kids were quite hilarious. We also enjoyed church and a rainstorm.

Monday Emma started Theater Camp. She spends a large chunk of each day at camp, with their performance on Friday. Today was a lot of warm ups, auditions, and casting. They will actually be doing two small plays. For one she got the role of Jack's mother (from Jack and the Beanstalk fame). This is a small part and something she was comfortable with. For the other play she hoped to be cast as one of the fairy godmothers, but to her surprise was cast as the lead - Cinderella. She's excited and nervous and having a blast.

At home on Monday we made a lot of progress preparing our dining/school room for painting. Lots of mudding, sanding, and repairs were accomplished. Paint was purchased. The trim was taped.

Tuesday was my day to focus in on back to school prep. Today's focus was our world geography study. I gathered books, worked through book lists, and sorted materials. The only subject left to really organize is science.

Wednesday was a laid back day at home, lots of playing board games and crafting things. The house feels pretty cramped with the contents of the dining room split between our piano/living room and our bedroom. It is very motivating for me to want to actually do the painting on Saturday. Does anyone else not enjoy painting? It just isn't my favorite thing to do.

Emma had a bit of a surprise at theater camp today, when she was asked to take on a larger part in the first play, as the sports reporter for the Fairy Tale News station. She has more lines and blocking to learn now, in addition to everything she's learning for her role as Cinderella. She is getting a bit nervous. Today was also costume day, so they got fitted for costumes.

Thursday and Friday have blurred together. The highlight for everyone was going to the theater camp performance on Friday night. The kids did a great job. Emma remembered her lines for both parts and had a wonderful experience. 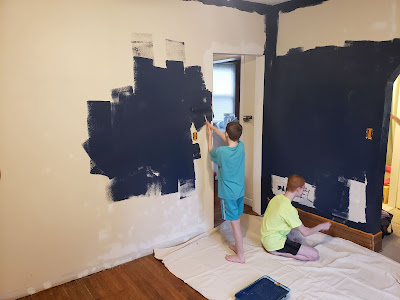 Saturday was painting day! The kids got right in on the action, painting the walls with us and with Grandma, who came to join in the fun. 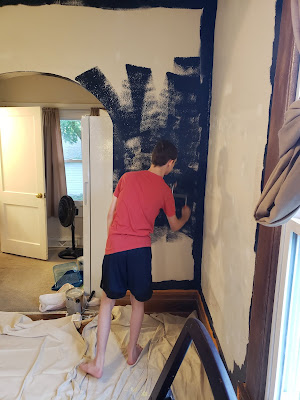 Nearly everyone wanted to help. Rebekah was especially enthusiastic about painting on the walls. 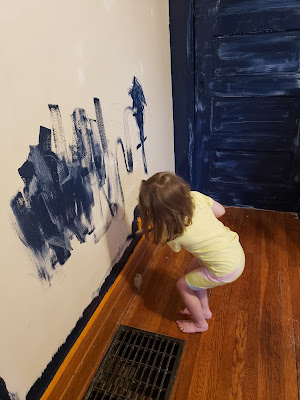 We chose Sherwin Williams color Naval. I was a bit nervous to go so dark. 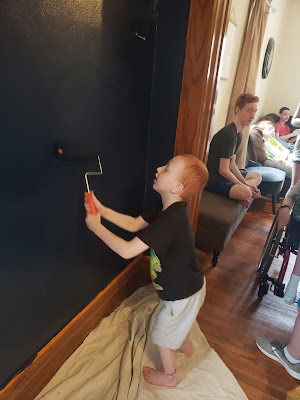 We spent part of the morning painting coat number one. Then everyone played and visited with Grandma until it was time to paint coat number two.

Once that was done we took the kids to the library to turn in their summer reading program tickets and choose the books they earned. 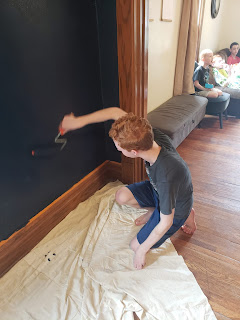 Sunday was a special day in a different way, because it was Samuel's baptism day. 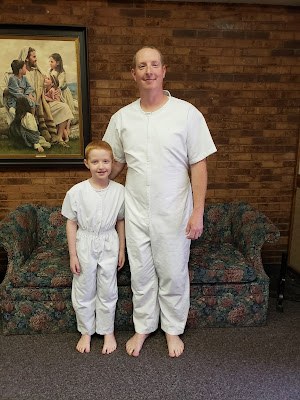 It is hard to believe my eighth child is 8 years old! He was so excited to get baptized. 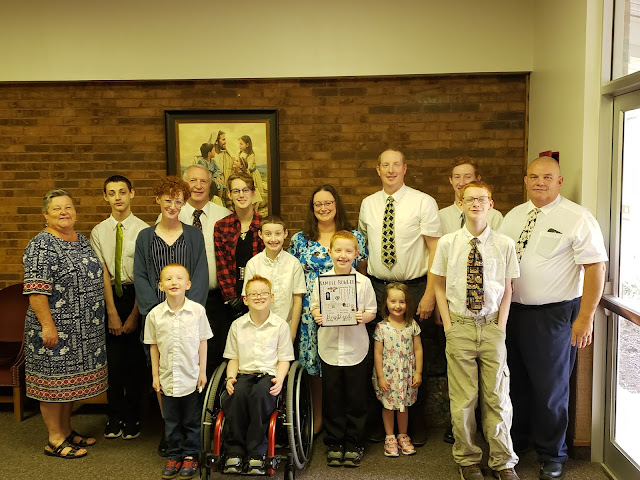 Monday was a lot of running. I had a doctor check up with a new general practitioner. Then Mason and I drove 2 hours round trip to spend not even 10 minutes at Children's Hospital picking up his new glasses. After lunch back at home, I did a grocery trip. 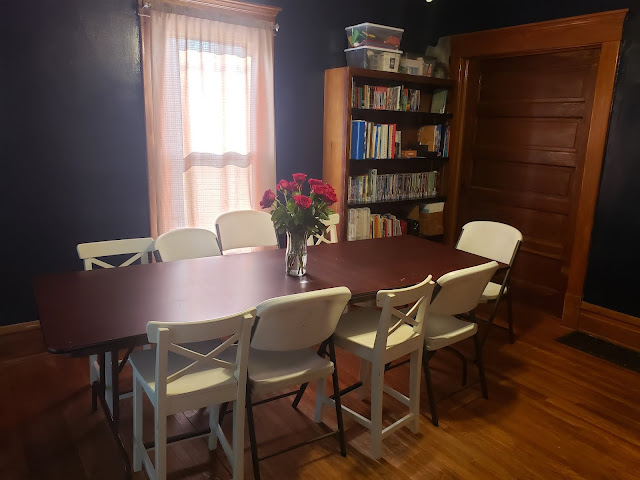 In the afternoon we put the dining room back together, hung the new dry erase boards, and put some of the books back on shelves. Here is a quick picture from one doorway, before we brought all the chairs back in to the table. 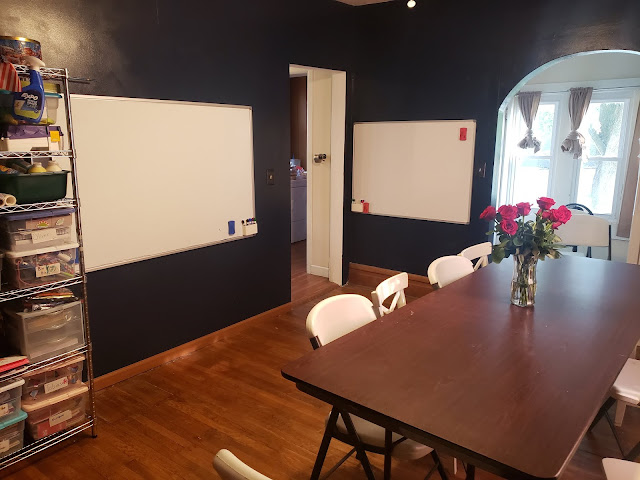 Here is the view from the other doorway. It's a wonderful space for eating and learning! Now we're moving on to mudding and sanding walls in the rest of the downstairs, with plenty more painting ahead.
Phew! If you made it through that rather long post you deserve a round of applause. While my biggest reason for blogging is simply to have a family journal of sorts, I also love sharing our life with others. Thank you for reading!
Posted by Tristan at 1:55 PM

Please remember to speak kindly. Unkind or inappropriate comments will be quietly deleted.

Tristan
I'm a wife of 20 years to one good man, mother to 10 sweet children. We homeschool, pray, play, and grow together one busy day at a time. 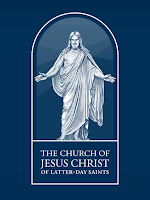